Teflon vs. Other Finishes

Teflon is a lot more affordable, and it does a basic stain repellent job. The other “healthcare” stain resistant finishes are costly products. Their strengths are permanence and stronger performance for both soil and oil resistance. Brentano chooses Teflon for residential applications while other finishes are used for healthcare purposes. END_OF_DOCUMENT_TOKEN_TO_BE_REPLACED

You are heart broken so I send you a song to sooth your pain. This is belated and maybe you are not sad anymore, if so, then … oh, yes, it is Valentine’s Day, Happy Valentine’s Day.

“I Wish You Love” sung by five singers:

END_OF_DOCUMENT_TOKEN_TO_BE_REPLACED

A Letter to Jascha Heifetz

I like Noh theatre and Japanese music. This morning while driving to work, instead of having my CD play, the WFMT radio station got turned on by mistake, and violin music flew out in such a passionate and expressive way that it stopped me from switching back to the music I had intended to play. I was awed by the impact made by the contrast: while my mind was ready for the stoic theatre of the east, the powerful music and the violinist’s prowess seized me. I stayed in the parking lot to finish the concerto just to find out who was playing. It was Jascha Heifetz playing Tchaifovsky’s violin concerto in D major with the Chicago Symphony Orchestra, the 1957 RCA recording.

Ah, yes, Heifetz, one of the greatest violinists of all time. I wrote to him once, his identity unbeknown to me. END_OF_DOCUMENT_TOKEN_TO_BE_REPLACED

Back to Basics Inspirations 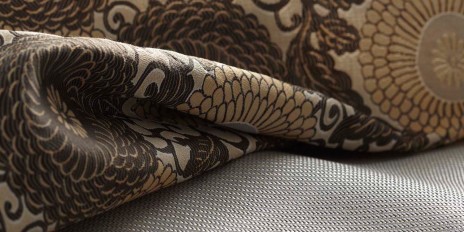 The spring 2012 collection developed around a desire to create things that possess a tranquil quality. We are introducing soft textures and subtle patterns, many within our Brentano Green line. There are high performing patterns too like Plein Air and Zinnia (above), but in my mind, the idea of tranquility connects most closely with green mindfulness.

END_OF_DOCUMENT_TOKEN_TO_BE_REPLACED

You are currently viewing the archives for February, 2012 at Woven-Words.